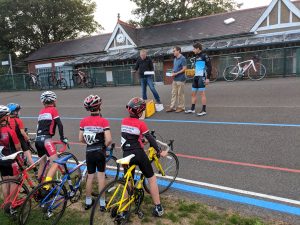 Once again we find ourselves at the close of the season, and this year the last week marked a very special occasion.

Earlier this year SRVC rider Chris Hewitt, sadly passed away whilst racing at cyclopark in Kent. From the funds raised in his memory, SRVC and Chris’ family decided to purchase a defibrillator for use at the track, by both the track and cricket pitch users. This was presented to league chairman Steve Kane and cricket club representative David Corney.

The equipment was presented on behalf of SRVC by Simon Spalding, who had this to say about his friend and clubmate:

Chris Hewitt joined SRVC shortly after it first started 4 years ago. From the moment he joined his enthusiasm was obvious to everyone. His training regime was completely bonkers and he would regularly feature in the top 5 at the Surrey Leagues Vets nights at Dunsfold.

Being a small cycling club the guys at SRVC are all very close, and to a man everyone felt a great loss when Chris passed away.

At Chris’s funeral, (attended by so many people) a large amount of money was raised in donations. This was when his wife Andrea approached SRVC for advice on how the money could be best used. 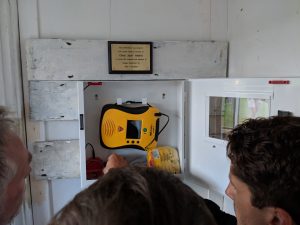 On the day of Chris’s final race, two SRVC riders were dealt with by both the London and Kent air ambulance services and it seemed fitting that they should receive a donation from the funds.

Upon further discussion it was agreed that a defibrillator placed at Preston Park Cycle track would benefit both the cyclists who raced there, as well as the cricketers (another of Chris’s favourite sports).

So here we are today with a newly installed defibrillator at the track. Hopefully it will never be used, but if it does, I’m sure Chris would be over the moon that something good will have come from his passing.